Ohhhh yesterday the weather yesterday was pretty cool here in Singapore. It's quite rare for the temp to go down to 21'C during the day. It was raining all day thus the cool weather. It was one of the rare days we did not use the a/c. The wind blew so hard it made low town howling sounds. 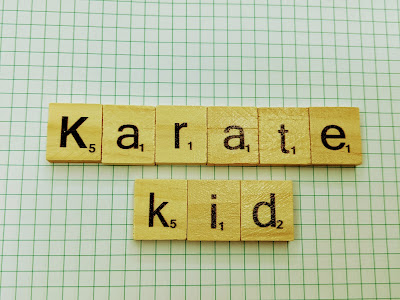 Since the weather was cozy we spent the day watching more episodes of Cobra Kai. I loved Karate Kid when it came out in 1984 and I had a crush back then with Ralph Macchio (who didn't?). I super loved the movie I named one of my programs as Project Miyagi.

Only discovered Cobra Kai a few months ago and we loved watching it, so we looked forward to watching the third season. Glad it came out earlier than planned. It's really interesting to see the story continue 35 years after the movie came out. We're now retracing the show and just watched the original Karate Kid which is finally available in Netflix. We'll probably watch the other installments next weekend.

I was just in third grade when the original Karate Kid was shown. My other favorite movies at the time were ET and Star Wars. I guess it was an impressionable age because I carry thoughts about those movies to this day. I told Sweetie that Kreese from Cobra Kai is like the new generation Darth Vadar, haha. What about you? What movies from your childhood would you want to see resurrected 30 years from now?