The Domesticated Goddess Journey: Learning How to Cook

My journey to become a domesticated goddess started over ten years ago when Sweetie and I got married. It was hard since we always had helpers at home when I was growing up. Sweetie and I had to compromise about having helpers. He grew up without helpers (we're complete opposites!) and that meant he wasn't comfortable having any at home. My Mom knew I won't be able to cope so we always had someone who would clean the house once a week and do the ironing*. I had to learn how to cook though.

I only learned to cook because someone advised me to treat cooking like a science experiment. I was forced to learn because a few weeks after our wedding the party leftovers from holiday parties started to dwindle and buying cooked food got costly. I started with egg, then hotdogs and canned goods. The only real dish I could cook ten years ago was spaghetti and lasagna. I didn't go further than that in the beginning because I have issues with gas stovetops. 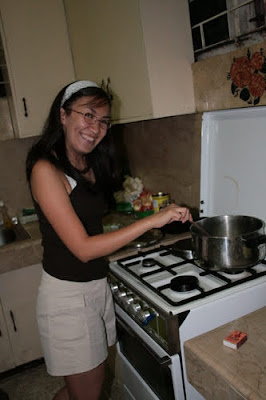 Eventually I expanded to simple Filipino dishes, but I had a lot of kitchen mishaps in the beginning. I cut myself many times cutting veggies, oil wisik and getting burned. I realized I should have paid more attention during cooking class in HS (I only liked doing the groceries hehe). My cooking prowess improved when I discovered electric stoves.

Here are the ways I learned how to cook:

(1) Coaching by friends - the spaghetti I cook for my friends was taught to me by my seatmate at OHSI, Maica. She had to teach me several times until I finally got it. It was the only thing I knew how to cook for many years. I learned how to cook adobo from Mang Gerry (Komikero) and my housemate's ex. Tappy taught me how to bake fruitcake and I ping her annually to review me how to make it haha.

(2) Attending classes - I used to attend cooking classes hosted at Maya Kitchen. They used to invite bloggers and I enjoyed attending those classes. I was planning to enroll in cooking and baking class this year, but the pandemic foiled my plans.

(3) YouTube - Would you believe it was Dominic Ochoa (the actor) who suggested to me that I could learn a lot about cooking from YouTube! I learned how to slice veggies properly because of YouTube and I look up cooking/baking techniques also via YouTube. I watch a wide array of cooking videos, I watch Masterchefs, homecooks and oftentimes I just search a dish I'm craving for. My current favorite is Simpol. 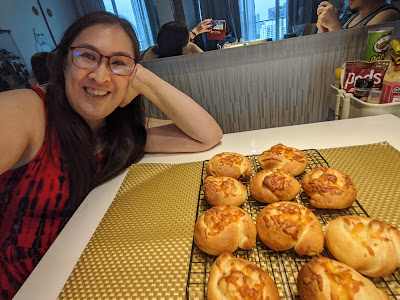 I think Miggy is a better homecook than me. He has his Papa Lolo's talent and he is more experimental. One of my goals this year is to learn how to cook our family recipes. I'm stuck here in Singapore for now so I'm starting with recipes. I've been filming how I cook Miggy's favorite recipes so he can make it for himself back home. You can find the "Recipes for My Son" here.

I only started to learn how to cook ten years ago. It's never too late to learn! I'm still picky on what I cook (because I'm scared of oil splatter!), but I'm always up for a challenge. Maybe next year I can finally enroll in the class I've been eyeing to enroll in.

What about you? Are you a talented cook or are you like me? Haha.

If you're curious how I started my journey to become a domesticated goddess. Read the starting point here.