Our family car was Daddy's 1967 W11 190D Mercedes Benz. I blogged about the Chedeng it last July. The car serviced us until into the 90s. Daddy super loved the car, but it eventually had to retire since it became hard to maintain it. The other car we had at that time was a red Opel car. I'm not sure what model it was, but it was mainly my Mom's car which was eventually used by my Ate and Kuya to go to school. 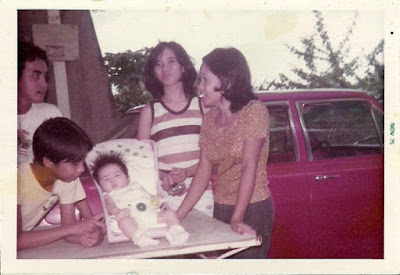 That's the red Opel car. And that baby is me!

I remember riding it because the only way my Ate and Kuya can borrow the car on weekends was when they would bring me along. I remember once going to BF with my Kuya to bring a gift for his then girlfriend, Gerry (I don't know why I still remember her name haha). Then there were weekends when we'd go to La Salle when they had org activities. My Mom said that the car serviced the family from when my Ate and Kuya were in elementary school (I wasn't around yet).

The most memorable bit about the red Opel car was revealed on my Kuya's wedding day. He shared that the car was carnapped somewhere in Taft Avenue. I'm not sure if it happened when he was still a student or when he was teaching in La Salle. But it happened. It just disappeared. He said he sweated buckets and walked up and down the streets to look for it. He found the car about two blocks away from where he parked it. The car being so old conked out in the middle of the street. He was so relieved to find it and only told us about it on his wedding day.

I don't remember what happened to the red Opel car. I think it was eventually sold. Mom eventually got a white Volkswagan Passat car (B1? I'm not sure). Now this car deserves a blog post for itself. It's action movie levels blog post. I'll write about it on another day.

Those three cars were part and parcel of my childhood. We eventually used cars that were office issued so they came and went. We did keep Kuya's first car, a Toyota Corolla. We kept it for almost 30 years! Mom finally sold it a few years ago. Ahh that car saw me through high school, college, grad school and Miggy's HS graduation. We also had a red Lite Ace which was used for business and I vaguely remember a yellow pick-up when I was in HS. I'll leave those memories for another day.

So that's how a red Opel car disappeared and thank God it was old and conked out in the middle of Taft Avenue.