I was Super Afraid of the Hulk, Mark Ruffalo Changed It

Ohhh, when I got in the taxi today to go to my PT session I was so surprised the dashboard had a figurine of The Hulk on it. I used to have an insane fear of the Hulk. I was a young child when it aired in the Philippines and Lou Ferrigno as The Hulk really scared me. 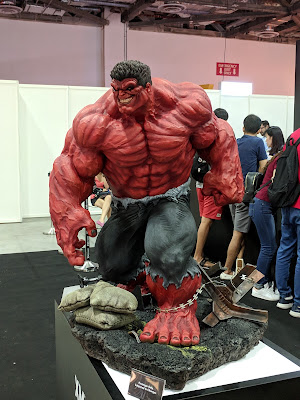 Whenever I see an image or a figurine of The Hulk I turn away. It's worse when it's a huge statue! The 80s show looked really real and to little me The Hulk was a scary monster. It's a little fuzzy to me now why I was so scared of The Hulk. Things changed because of Mark Ruffalo and how they portrayed The Hulk in the Marvel movies.

This is the scene that broke my fear of The Hulk -

I think I saw how much more human The Hulk was from the Marvel movies. I was probably too young to understand why The Hulk became The Hulk in the TV show. All I remember is he'd get mad and turn into a gigantic green monster. Mark Ruffalo also made Bruce Banner more adorable and cute. The CGI of The Hulk was also less menacing and he actually looked huggable to me (hehe).

So that's how I got over the scary Incredible Hulk. What about you, have you been scared of a fictional character?