I am about ready to lay my iPod to rest because of Spotify. Managing so many devices can get annoying since you have to charge so many things. What I appreciate about my iPod though is I just have to charge it once in awhile and the audio quality is still much better than listening to music through your laptop or phone. I haven't updated my iPod though for the longest time since its "base" is my desktop in Manila so Spotify has been my best friend specially.

Spotify has proven to be very useful for me since I can listen to a myriad of songs depending on my mood. I am also very lazy to create playlists so I just normally browse and search for something that would match my mood. And so I tried listening to Justin Bieber's new album because friends have been "raving" about him. Justin Bieber's new album "Purpose" is actually quite good. He's managed to transform from his teen persona to a more serious artist. I used to cringe whenever I heard "Baby baby..." haha, but now I listen to his album at least once a week.

And in eleven days I'm going to watch Madonna live in concert in Manila! I'm actually going to take a leave to go home and watch the concert since Sweetie bought langit tickets last year. Sweetie and I used to watch a lot of concerts, so hopefully we'd be able to watch more shows this year. Egzoited! 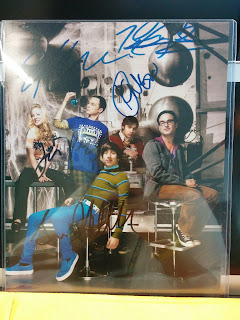 A few weeks back I indulged and bought a few Big Bang Theory memorabilia -- a signed photograph and their superhero photograph. I just have a few memorabilia, it started when I got Big Bang Theory stuff on my birthday. It was like Christmas day for me when the signed photo arrived in the mail hehe. I had a hard time starting a collection again after Typhoon Ondoy and it's only now that I've picked up collecting stuff again. Unlike pre-Ondoy days though I'm being more selective and going small (i.e. my Yoda collection) and well I don't really want to spend a lot on collecting stuff. I just get stuff to reward myself hehe.

What about you, what are your favorite things?