The first time I heard about the Star Wars Identities exhibit was in Sydney. I wasn’t able to go, but my friend Paola brought back a really nice Yoda t-shirt. The exhibit in Singapore opened last January 30. I saw the announcement while I was warded at the hospital.

I used it as my motivation to improve my breathing and step count. It took three months before I was ready to go. Started the day with my regular check-up. My doctor was happy with the huge improvement I had with my breathing test. Even with the stamp of approval I knew I had to conserve my energy for the exhibit*. 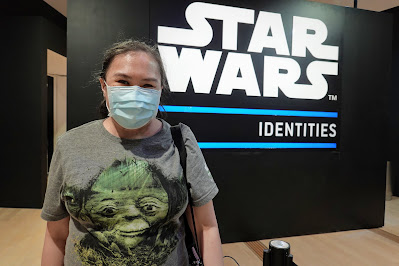 Here's my vlog of the exhibit -

The Singapore Star Wars Identities exhibit is at the famous ArtScience Museum. We booked a weekday ticket to avoid the crowds. We got in earlier than our appointed time and was greeted by the staff and we had to log-in using our band. We were ushered into a mini theater area where we watched the exhibit intro. After that we were asked to choose what kind of creature we wanted to be. It was a quest to develop your own Star Wars identity. Throughout the exhibit you’re asked to badge in to develop your Star Wars identity. 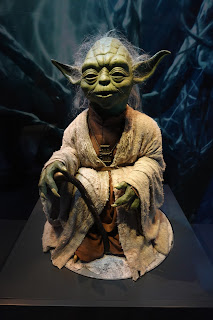 The exhibit featured how they developed the characters like Jarjar Binks, Luke and Leia (Did you know they originally thought about using a princess as the main protagonist? Eventually they decided on the twins). Yoda was originally developed as a small human, a dwarf, eventually he became the cute elf-like creature we love today. Chewbacca’s development was also shown, I’m glad he turned out cute, like a huge teddy bear.

It was a thrill to see the original costumes, regalia and models used in the movies. It was surreal to see C3PO, R2D2, Boba Fett, BB8, the mask of Ponda Baba, Stormtroopers in the flesh. They also showcased Chewbacca, Han Solo, Princess Leia and Luke Skywalker’s original costumes. Princess Leia’s bikini and Luke’s pilot attire was also on exhibit. The original Han Solo carbonite was also on exhibit. And, of course, Queen Amidala’s regal attire.

Of course, the highlight of the exhibit for me was seeing Yoda in the flesh. I super love Yoda and my collection is still growing. I snapped up a Dagobah Yoda with Hut Funko Pop and shirt at the exhibit shop.

It was an honor to see replicas of the starships. Too bad though the Death Star wasn’t present, but the lighting effects was cool. Of course, the most evil villain, Darth Vader had his own special area. He was a towering force over the Jedi robes.

The exhibit was a great experience for me. I started my love for Star Wars when I was just 3 years old. Yup, my family brought me with them when they watched it in the cinema. And I have since been fond of Yoda (plus ET and Alf, much to my Mom’s consternation). Of course, I wore the Yoda shirt Paola gave me when I went to the exhibit. Yay!

May the force be with you!

*Slept the entire day the day after to recover LOL.