The Force was Strong Yesterday 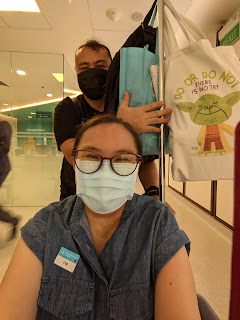 I have been doing a number of tests the past few weeks. My doctors have been doing this to investigate how to help me get better. I haven't been sleeping well since the medtech told me my lungs look really bad. My doctor discussed options last week, but she wanted to do one last test to be sure.

Two of the options would require surgery, the least invasive would be medication. My other doctors were worried about doing surgery because it will be too risky. That's what kept me up at night. I was also wary about doing the test because I bled a lot last time I did it.

To be honest I was scared to do the procedure*. My long time cardiologist though reassured me and said he trusts my new doctor. I promised him I'd be brave and would do it. I prayed and meditated. Woke up early yesterday for my early appointment.

I was awake during the procedure. I prayed the rosary while they were taking a peek at my heart. Midway through the procedure my doctor told me they were not going to do phase 2. They were already able to determine why I was still having shortness of breath. She also said it wasn't what she feared. She decided to cut the procedure short since I could just take more medications to help resolve my issue.

I was discharged after lunch with orders to rest until the wound heals. Sweetie has been taking care of me and I'm thankful he's been by my side the whole time. I'm also grateful for all the prayers my family and friends have been doing for me.

Thank you Lord for your continued healing. The force was strong yesterday :)