Must Keep My Mojo Intact 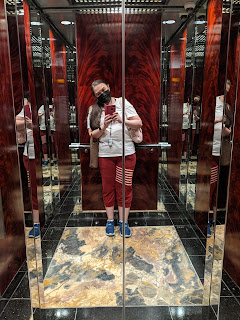 A friend of mine advised me today that I probably need to find new ways to cope. I told him that the things I'm experiencing are new and it's getting frustrating. I didn't sleep well last night since I was having this terrible headache. I've been scared to take pain medication since it may interfere with the blood thinner. Things were not this bad when I had my first PE in 2018 and that's why I've been having a hard time.

After chatting with my friend I finally did the second treatment for the soil. I've been meaning to do it for a few days now. I was putting it off because I've not been feeling well. Told myself I should just get on with it. It was an easy task of watering the soil with a hydrogen peroxide mixture. I was exhausted after the task and rested in the couch. It was fulfilling to finish the task.

Took a bath and prepared my own lunch and worked on my quilt project while watching some vids. I was pondering whether I should go to my PT session. My asthma was acting up again. I pushed myself to go since I know my physiotherapist would know what to do. We talked for awhile and she said that I was a different person today. She said my illness is taking away my mojo.

It was then I realized I was already allowing my illness to take over me. I need to fight this back. I immediately called up my doctor and would've gone to him if he was around. I'll see him tomorrow instead. My PT then asked if I was up to do some biking. I felt a bit better after setting up an appointment with my doctor so I immediately jumped on the bike. We just did a few rounds and I felt much better after that.

I was exhausted when I got home. Took a shower and then just rested. I just checked now and saw that the air quality has been bad and is probably the reason why my asthma has been acting up. I hope I'll have a good night's sleep and have a good check-up tomorrow.