Have You Heard About the Title "Chief Mouser"? 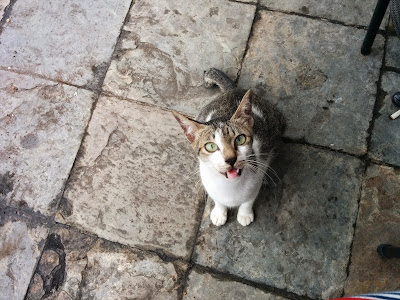 I found a video that featured all the cats that served as chief mouser. The interesting about the history is the chief mouser stays at 10 Downing Street and could serve several prime ministers. There are some instances there could be two cats, but only one chief mouser is named. The current chief mouser is Larry and watch until the end of the video because it hung out under the car of the former US president. The question is why? Hahaha.

I got interested in the video because during President's Biden's inauguration week they also featured his two dogs that previously lived in the White House too. This got me thinking, do Philippine President's have pets? Did a little research and this is what I found:

President Duterte, I couldn't find any mention of pets, but instead found out that there's an average of 27 presidential dogs in Malacanang that are trained by the PSG. Half of the presidential dogs are in Davao City and the article mentioned they do like ear rubs too.

President Aquino -  ohh PNoy did have a dog. It's a German Shepherd that was given as a gift and the name of the dog is "Apollo"! Apollo was trained to become part of the presidential security detail according to the article.

I tried to look for references on pets other Philippine presidents had but I think I need to spend more time to research about it. Most of the articles were about the dogs used as security detail of presidents. When you also search for the term "presidential pet" the reference usually points to the Philippine Electoral Tribunal hehe. I should probably search through Google Scholar or more through lifestyle magazines. Kinda interesting noh?