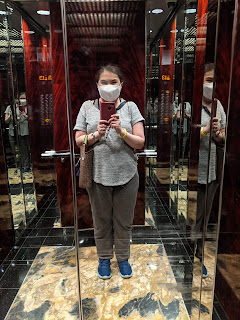 I have been feeling unwell off and on since end of August. It's tiring and has affected my productivity. The meds my doctor gave me helped, but I don't want to be dependent on medication. I also have a target to reduce the medication I take daily.

Last week I was so exasperated already at my condition. I was doing everything my doctor told me to do, but my progress was still slow. I remembered a session I watched last year. It was a session on how you can heal yourself through meditation. I learned this from Dr. Joe Dispenza. He said you can pull energy from within you and direct it to the area you want healed.

Dr. Joe Dispenza learned it when he had an accident. He had a spinal and was told he had to go through several surgeries, but it was uncertain whether he could walk again. He eventually healed himself through his mind (watch videos about it here).

My Kuya enrolled me in the sessions Dr. Joe taught and I watched all the videos, but never put what I learned in consistent practice. I thought I'd put what I learned to practice last week. I started to do the meditation to pull energy from within myself and re-directed it to what I needed to heal.

By weekend I was feeling better I decided to do another mind exercise that Dr. Joe taught. He said you can train your body on something using your mind. I've not been able to do any of my physiotherapy exercises at home for a long time now. Last weekend before going to sleep I would think about doing the bridging exercises. I would do several rounds in my mind.

Yesterday my physiotherapist asked me to do bridging exercises and she was surprised that I was stronger than usual. She was so happy with my exercise performance yesterday. I shared with her what I did and she said that it really helps when your mind is in a good place.

So that's my mind over body experiment. I did that because I was so fed up feeling unwell. I thought about doing the meditation exercises since I wouldn't lose anything anyway if I did it. And it looks like it helped. I was super wiped out after my physiotherapy session yesterday, but it was a good wipe out. What's important to me is I'm okay today and still kicking.

Email ThisBlogThis!Share to TwitterShare to FacebookShare to Pinterest
Mga etiketa: getting well, living with may thurner syndrome, wellbeing tips, wellness