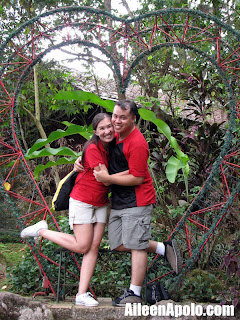 Being the youngest in our clan has given me the privilege to be exposed to relatives of all ages. I have nephews and nieces who are older than me, so technically I'm already a grand-aunt of sorts. I think I was in third grade when I was reeled in to help in wedding preparations of an aunt and a cousin. Eventually my sister, then my brother. During those times my parents, aunts, uncles and cousins would tell me love stories.

In the olden times (like 1950s). This was the time that guys would make harana to girls and according to my Mom it's true that sometimes strict mothers (or naughty brothers) would throw out the contents of the urinola (euww!). And during that time during dances guys would instruct their friends to surround their girl so no one else can approach her (being territorial huh!). With no telephone or gadgets, the best way to reach a girl was to send her love letters.

In the 80s. My Mom told me back then that when my time comes I should be courted properly, with a guy going to the house with flowers etc. and if ever we go out there should be a chaperone. I did play chaperone to my sister a couple of times (we're 16 years apart) and I often enjoyed the gifts her manliligaws would give me. They'd come to the house to pick up my sister and I'd usually be the first to say hi to them. Of course, they had to have pasalubong for the pesky little sister.

My worst nemesis then was my future-brother-in-law who forgot to bring me some cotton candy. I was so disappointed and cried when he arrived empty-handed. He came back a week after with two huge cotton candies for me. Oh I do remember my sister making telebabad in the wee hours of the night hehehe. My sister says she has a box full of love letters from my brother in law.

In the 90s. So things were a bit different in the 90s. Technology started to drastically change how we communicated. This was the time that the beeper was the in thing and in the mid-90s cellphones started to be popular. I remember when I joined Smart they had just marked their 500,000th subscriber. A lot of people though still burned lines at midnight and wrote letters.

The new century. The last decade has drastically changed the landscape of how we communicate, much less the rules of courtship. My Mom just shakes her head with how we "youngsters" communicate. Relationships are born out of SMSing, chatting, Friendster, Multiply, Facebook and other social media stuff. My friend in Pakistan told me that Orkut (Google's social media platform) really changed how men and women would meet in his country.

And based on feedback from my nephews, this is how one can find out if you're already "together"...