What Would You Do?

Yesterday I flew from Singapore to Sydney. Woke up before 4 in the morning to make it to my 7am flight. I was looking forward to getting some sleep for a few hours of the 7 hour flight. When I boarded I was surprised to find a man sitting on my assigned seat. I immediately got help from the crew and he requested for the man's boarding pass. Instead of showing his boarding pass the man said, "I like this seat! I don't want to move!" I always get an aisle seat because I usually need to go to the toilet several times, so I got a bit stressed already from his pronouncement. The flight crew insisted for him to move and I sat down. The man kept saying again and again that he wanted my seat. I ignored him and just went on with my business.

The man and his wife eventually started to argue and the woman moved to another seat in the back. There was a lot of shuffling around as they gathered their things. The flight was a bit delayed already since we had to wait for 3 connecting flights to arrive. The cabin was busy with people still coming in. I eventually fell asleep and got a rude awakening when I saw two feet just inches away from me. 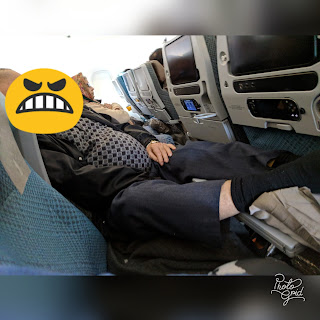 I immediately reported it to the flight crew and the supervisor had him remove his feet. The man kept looking at me with accusing eyes. I ignored him and read a book. A few minutes later the supervisor approached me to check if I was okay and asked if I wanted to be re-seated. I said that I was only willing to move if there was an aisle seat available. There was none. I told him I should be okay as long as he stopped putting his feet up on the tray table. I thought that was the end of it.

After some refreshments I decided to take another nap. I was rudely awaked when I felt something on my leg. It was the man's feet! He had put his feet on the seat pocket and probably stretched. My body had reacted violently to the touch and he woke up as well. He did not apologize and just went back to sleep.

My friends said that I should not have flown in economy. I normally do since I don't need a lot of space and as long as I'm on the aisle I'm usually not bothered by anyone or anything. I prefer to keep my savings for flights to stay in better hotels. This was really a terrible incident. I don't fault the airline because it was entirely the bad attitude of the man that ruined my experience. He was mean, unapologetic and thought that he can just do whatever he wanted.

I could've probably insisted to be re-seated in a better seat. Looking back I should have done that because the stress has affected my body and it's been quite difficult to work today. And that's the reason why I decided to write about the incident -- to "download" it from my mind so I can move on.