My blog has been silent the past few weeks because I thought I'd spend every extra second I had with my family. Being away from home has definitely been a huge challenge for me and despite the fact that it's been almost 3 months it's still a struggle for me every single day.

My boys and my Mom welcomed the new year with me in Singapore. We decided to stay in and just celebrate in the apartment since my Mom was not feeling well. We had fun despite missing the fireworks and usual Christmas ham. We replaced the fireworks by just watching what was happening at Marina Bay through TV. And substituted the Christmas ham with some honey ham from the supermarket. Despite the missing elements we were complete because we had each other and I'm glad we managed to spend some time with my brother and his family too. 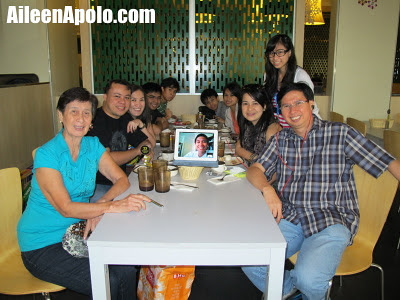 I have been thinking a lot about making a list of new year's resolution, but decided not to make one because I have a backlog as old as my blog. The year 2011 is probably one of the worst years of my life because I lost my Dad, but I guess he wanted me to move along and I got so busy the rest of the year and eventually found myself living in another country! Moving was totally unexpected and unplanned, but opportunities are hard to pass if it's something that you love doing.

My heart is far from being whole still since my Dad left a very, very huge hole. During mass yesterday I realized that such is life. One's parents grow old. My Mom kept telling me when I was younger, "How will you survive if I'm not around?" It is one of those things that made me stronger and brought me to where I am today (that's how I became self-sufficient boss since you wondered, haha).

I realized yesterday during mass that what brings out the best in me is my family's love. Said in a cheesy way, "They are the wind beneath my wings". And I have to do well while I am away. The priest nailed it yesterday during his homily when he said that each of us should be a star for others.

So that would be my mantra for this year.